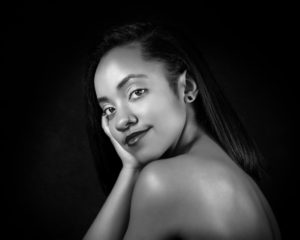 Charity Broussard (Company Member) is a native of Flint, Michigan where she attended the Flint School of Performing Arts throughout high school. Upon graduation, she was accepted to Goucher College as a recipient of the Fine and Performing Arts in Dance scholarship. While at Goucher, Charity was a part of the Goucher Repertory Dance Ensemble, as well as a founding member of Goucher College’s Dancers of Color Coalition. While in the Goucher Repertory Dance Ensemble she worked with many choreographers some of which included Milton Myers, Gabrielle Lamb, Christian Von Howard, and Iquail Shaheed. She recently graduated from Goucher in May 2017 with a Bachelor of Arts Degree in Dance Performance, with which she intends to continue inspiring others through dance. Since graduation she has begun working as a dance teacher and recently performed in works choreographed by Iyun Ashani Harrison, founder and artistic director of Ashani Dances, for Ashani Dances FIVE! at the Baltimore Theatre Project in Baltimore, Maryland. This is Charity’s first season with Ballethnic Dance Company.